I have a love affair with Paris – I absolutely adore it. The romantic city streets, the delicious cheese/ham/wine, the pretty macaroons, the stylish ladies and of course the beautiful sights. When I heard that the queen of burlesque, Dita Von Teese would be doing a new residency at the Crazy Horse I was like: “Oh my godddddd, let’s do this”!

The show would combine a plethora of my favourite things: Dita, Paris, Sebastien Tellier for the music and Christian Louboutin for the shoes – WOW. I threw caution to the wind and booked the tickets for the last weekend in March, giving me plenty of time to get excited by the endless teaser photos on DVT’s Instagram page.

I’d never had the pleasure of seeing Dita before so my anticipation went into overdrive. I had hoped it would be all the things I imagined: glamorous, seductive, seamlessly professional, alluring…the list goes on.

When wondering what to wear for such an occasion there was really only one choice – the Deadly Dames ‘Downtown Dame’ Black Leather Dress. The question is would it be too tight after all the Croque Monsieur I had consumed?!

On arrival there was a queue to get in but this provided a great opportunity to people watch and take in all the beautiful outfits of my fellow crowd members. It really was amazing to be in a place where everyone had pulled out all the stops for the evening – a truly old-school Hollywood ambience about the place.

We were led to our seats which were very close to the front. I had to navigate sitting in my tight dress with a table so close to my extra long legs that I felt hemmed in, but hey I managed it. 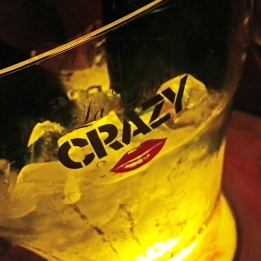 I have a confession…I told myself I wouldn’t go to the bathroom because my dress was uber tight. I sized up by getting a large but it was still a struggle to get ‘the girls’ snug inside. If I’d have gone for the XL it would have been baggy on my ass. Stupidly I gave in to my urge to go to the ladies’ room (thanks to the champagne) and then realised that my plentiful hips wouldn’t allow for me to have a carefree pee in the glamorous Crazy Horse bathroom!

So a mild panic set in and I realised I’d have to undo the dress. I broke out into a cold sweat when I couldn’t get the bloody thing fastened all on my lonesome! Panicking because I knew there was five minutes until DVT herself graced the stage I tried every yoga pose possible to get the blasted thing fastened and my boobs securely back in the glorious dress. A big thank-you goes out to the little Irish angel that fastened my dress for and saved the day – I owe you big time!

The first scene that my little eyes saw was a feast of amazonian ladies dancing with their pristine bosoms out in all their glory. Moulin Rouge was certainly tame in comparison and I was only one minute into the proceedings!

I literally sat there, mouth open for the whole first fifteen minutes – I couldn’t believe I was actually at the Crazy Horse. Dita’s first appearance was so sexy; wearing a glittery tuxedo her routine was delectable – the intensity was spot on and left the audience gagging for more.

The girls in the show are definitely athletic – the positions they contort their bodies into were mesmerising. The music definitely added to the immersive experience and being a massive fan of Mr. Tellier it was something that sublime dreams were made of.

A highlight of the show was the segment where Dita was adorned in a video-mapped dress – this took the striptease into a whole other level, perhaps even into another world. Directed by Ali Mahdavi the use of this technology was a fabulous idea and one which I applaud DVT for utilising.

The Britney Spears ‘Toxic’ slow routine performed by the CH girls was absolutely dreamy, whilst the group rendition performed with Dita was tantalising. I mustn’t do a review of the show without mentioning the fashion. The costumes made by Zuhair Murad, Alexis Mabille and Ralph & Russo were something of pure fantasy, the shoes were lust-worthy and at times I believe I spent a little too much time staring at their glory rather than the performance.

The stage unfortunately wasn’t ripe for Dita’s infamous martini glass routine being small and short. However, we had the pleasure of witnessing her bathtub act, one which is an ode to a Crazy Horse dancer named Candida that did a bathtub act there in the 50s. Seeing this has really made me question my own bath time routine!

Sensual, indulgent and luxurious with a sweet French sophistication – this show was more than I imagined. Obviously I’d always welcome more Dita on the stage but I was so happy during the show there was a chance I may have combusted like a Ribena berry at any moment from happiness. I left the show feeling inspired to be more confident about my own sexuality and not afraid of it, actually quite empowered to kick some ass and I have to say that’s a rare feeling to experience when leaving any live event. Dita, you nailed it.

Got my @bravenoisebeer 🍺 collection out, ready to listen to this podcast. I couldn’t stomach it this morning in all honesty pre-breakfast.
Making silly faces with a drink in my hand is one of my fave past times.
Can you relate? 😂
F%!k that “well it doesn’t affect me” attitude.
🍺 by @rokhousebrewing - I picked up at the Star Wars Celebration Bottle & Can Share in Anaheim. 💛
I’ve got my snacks ready. HBY?