The 13th Feb was marked in my calendar for quite a while because it was the fourth birthday party for the infamous Beavertown. Its parties, like it’s beer are legendary.

For me though, this would be my first official Beavertown shindig. Although I’ve been sipping its tasty ales for a while now, I’ve pretty much been admiring them from the back row of the auditorium, preferring to dodge the uber excited fans waiting for a whiff of their idol and slightly embarrassed because now everyone likes their new favourite band.

This event certainly proved that. Like anyone I understand the allure of craft beer but the epically long queue signalled that now one of my favourite bands can sell out that stadium three times over. To be honest, queuing for hours to get into any type of beer festival felt a little bit alien. Yesterday I saw families, OAPs, couples, babies, girl gangs, guy gangs, and lonesome beer geeks – not just the hundreds of omnipresent craft beer fan-come beardy hipster often typified in the media. Great beer crosses boundaries guys.

The bashing Beavertown received on social media was unnecessary. Yes I know people were pissed off that they couldn’t get in but shouldn’t we be patting these guys on the back for creating such a frenzy of excitement about that thing we love – great beer!?

In four years they’ve cultivated such a passionate following and it’s not like that love has been unrequited – their beer it always on point, rewarding to sip and yes, the cool points encompassed by its branding don’t go unnoticed either.

Look, if you were eager to see your favourite band and they were putting on a free gig then you’d get there early right? Call me unsympathetic but I queued for an hour and half in the cold to get in and man, it was definitely worth it. I know naysayers will say “they could have predicted the demand” but seriously I’ve never seen that hysteria for craft beer! There’s no way that could be have been anticipated!

Yes, a few more checkpoints for picking up beer tokens might have been a good idea but after seeing that photo of the dude stealing their beer and ramming it in his bag – the volunteers were hard pushed to keep the beer flowing and control the masses.  The queues for the elusive beer card (£20 for 9 thirds) were like something reserved normally for the January sale, thankfully though the wicked conversation and free tinnies in the queue somewhat quelled my moans. 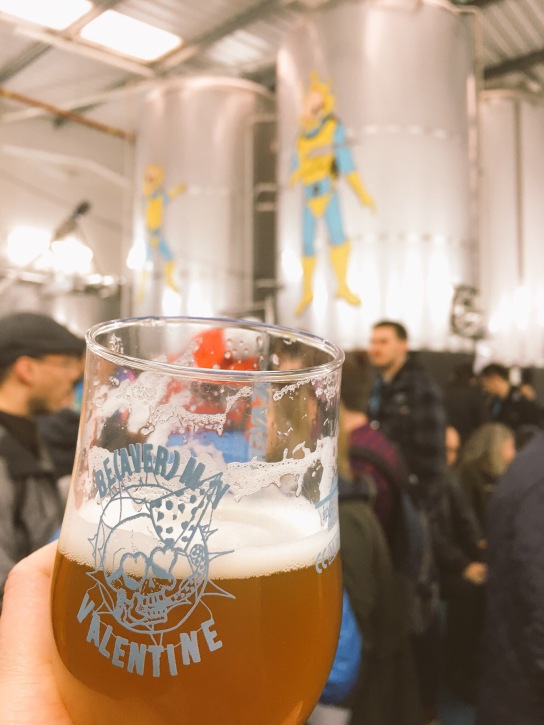 I attended the festival with my friend yesterday and we needed a strategy to get through our beer tokens pre 4pm so we chose to get a beer and drink it while in the queue for the next. Alas, this wasn’t as successful as we thought – we were disappointed not to get to sip the Omnipollo and Buxton collab (Chocolate Ice Cream) or in fact the Tiny Rebel/Dugess(se) collab (Pina Colada Pale Ale) which both ran out just as I got to the front of the queue.

To start the day’s proceedings I bagged the Beavertown birthday brew – Double Chin, a double IPA version of its Neck Oil. This beer is kick ass – with its citrusy buzz (I got hints of orange and pineapple). My buddy chose Appleation which suitably matched my beer selection in terms of ABV (above 8%) and probably explains why we were floating a bit while in the next queue.

I’ll not go into immense detail about every beer we sampled – 14 in total before we had to leave with the cans we purchased with our last tokens. However, here’s a handy hitlist of my beery highlights for the day:

There was certainly a bit of negativity flung in the direction of our Beavertown buddies due to the event, however there was also bucket loads of amazing chatter too. Regardless of which side of the fence you’re on, you’ve got to hand it to them – that birthday bash was a real life indicator of the growing desire for amazing beer and that makes me smile.