Skip to content
I recently had the pleasure of spending just under 24 hours in York. It was actually my first visit (well, that I can remember) and I was a little too excited to sample its delights.
My reason for visiting? Well, I was invited to attend the IoIC awards by Purple Monster who were up for the ‘Standout Communication’ award – and they only bloody won didn’t they?! Thanks so much for the invite guys.
I’ve been to a lot of award type events (it comes with with the marketing job territory right?) though this venue was definitely the best one yet. The National Railway Museum was definitely magical – the sight of the opulent trains dripping in gold trimmings actually got my pulse racing nearly as much as my trip to Hogwarts at Universal Studios last summer. I wasn’t sure this was possible at all.
Yes, I found the train with a bar inside it of course – you can always rely on me. I’m mentioning the awards because I munched on a tasty Yorkshire pudding with pulled beef and black sheep ale gravy! I’m not sure I’ll ever look at a Yorkshire pudding in the same way now. This little delicious treat was like a cross between a filthy Mexican meaty delight and a home cooked Sunday roast. Weird like a Heston-bluemential creation but I’m sure I’ll spend hours trying to recreate that delectable little Yorkshire pudding dream.
The day after the night before… so what to do? According to my research, I’d heard that the Trembling House of Madness and Brew York were the places be. My extremely helpful Twitter buddies also pointed out that I might like to give the Maltings, York Tap and also Fossgate Social a try to. With only five hours and a couple of vintage shops to throw into the mix I had to be smart with my decisions.
Vintage treats
It was only 11am and I was residing in a ‘post awards do red wine mist’ so we decided that a vintage shop would be the first stop in the five hour trip round York (with a rather heavy suitcase in tow may I add). Dog and Bone Vintage seemed to summon me from the allure of its photo on the Google listing and I’m seriously glad it did. I’d be happy if this place was my next home and this really is no joke. From the NASA bags, the vintage games and its shiny books that will make any table glimmer, this place is a winner. I felt like a magpie figuring out what jewel to make its own first. The choices were plentiful.
My credit card was happy that I walked away with just a cropped cowboy red jacket, a zany patterned shirt and a series of pinup goodies that will look rather splendid in our collection at home.
The next stop was Bowler Vintage in Fossgate. Sharply dressed gents, this really is the place for you with its glorious hat collection, sharp tailoring and beard grooming essentials. Gals fear not, the upstairs is like a treasure trove where labels like Collectif and Hell Bunny adorn the rails – there are also some genuine vintage gems to be found, like old school denims and the sunglasses collection kept me busy for a while. I walked away with some sunnies and little red pillbox hat – which I’ve longed for. Normally finding a hat that perches nicely on my massive head is rather difficult.
Beer o’clock
It was just past noon when we went on our quest to locate Brew York. We arrived at the gates and my heart sank when I thought the tap room wasn’t open but I’d read the sign wrong and realised it opened at noon – phew!
Brew York is located around 15 minutes from the station and hosted within York’s historic city walls. The brewery houses a 20 hl Brewhouse which is perfectly set up to brew it’s core range of six beers.
This place really remind me of Nightshift which I visited in Boston. Although it wasn’t busy due to it being so early we really sensed the good vibes in this place – I wish there was somewhere like this where I live, I’d definitely be a regular. For such a big space it really managed to feel homely and I really could have stayed there relaxing for hours. I’d love to have experienced the place on a Friday evening as I’m sure it would have been bursting with energy.
We chose to sip the Brew York, Brew York American IPA and the Big Eagle IPA. The latter was definitely my preference, it was just well a little more punchy and I certainly needed something with a little more flavour to get me going. 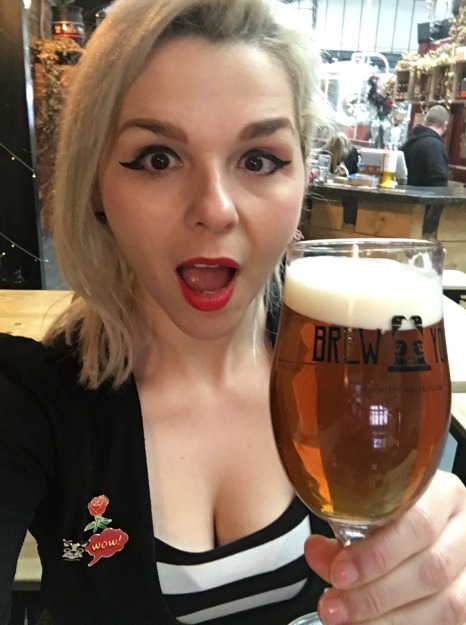 Next stop: The Hop – the sheer thought of having a stonebaked fresh pizza with a beer had me salivating like Homer Simpson lusting after his favourite shiny pink ring doughnuts. The bar man (sorry I didn’t catch your name) was so friendly and whilst pouring me a half of White Rat he placed a bet that the pizza would rock my world. I was sceptical after suffering major pizza disappointment in the past from so called ‘artisan’ outlets that tricked me and my cheesy lust with their promises.
Our ‘spicy pepperoni’ landed on our table and my eyes popped out my head because it looked so darn tasty. Would it taste as good as it looked though? It really tasted sublime, the right side of spicy, it was crispy edged and they didn’t scrimp on the cheese – good work guys. The venue was great, airy and quirky and with our pizza (big enough for two to share) and my beer coming in at under a tenner this place did rock my world. 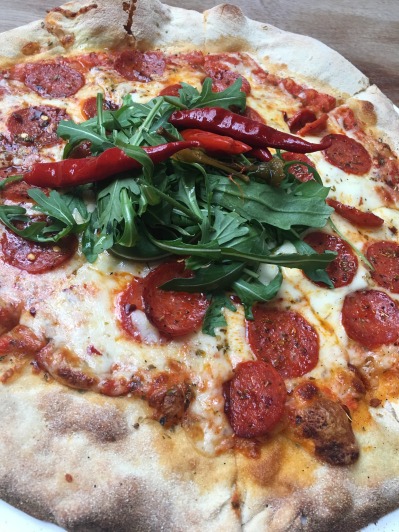 My ‘must-visit’ was definitely the House of Trembling Madness and what a place this really is. So many beers to choose from downstairs and so much quality banter upstairs in the pub/restaurant area. With a whole floor of beer to drool over it was hard to know where to start.
I needed a beer to contemplate my overwhelming beer purchasing decisions, so upstairs we went. After making friends with a few locals we managed to hustle a few standing spots which was perfect before the epic three hour train journey we’d need to catch afterwards. If there’s more than a few of you wishing to eat here plan carefully, this place was buzzing and hard to find a few seats if you were craving their mouthwatering pies to eat. What I will say is – be patient, browse the beer selection, grab a half and chill standing up and it won’t be long before your reach table nirvana. 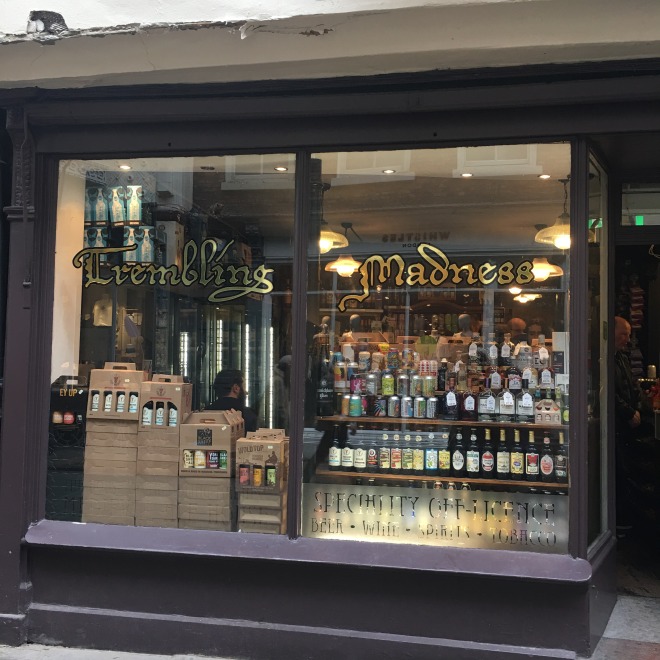 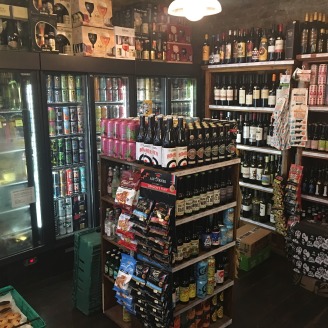 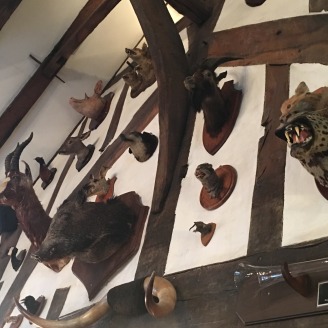 As we sipped our beer, mine was a cheeky little half of ‘Seed of Good Hope’ by Bad Seed Brewery we drank in our surroundings. A collection of taxidermy animals stared at me from the high wall above as I considered if I could truly manage the £9 yard of ale before the train journey home. I decided it wasn’t a great idea, Virgin Trains are hellish enough.
If carrying beer wasn’t an issue we’d have no doubt walked away with more beery delights. So, what did I grab….? Here’s the lowdown below: 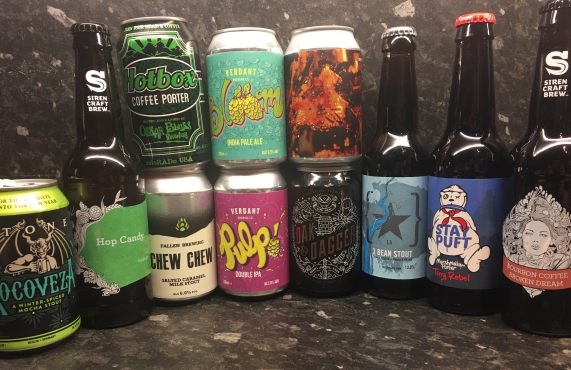 Last stop on the way to our train was The Maltings which kind of looks like a crazy old school rock club from the outside with its plethora of black paint. Getting a seat inside was really easy mid-afternoon and the beer choice was pretty good. I settled for a ‘Howl’ by Rooster brewery which I sipped while readout the hilarious trip advisor review adorning a wall near the bar. The reviewer in question really wasn’t happy at the spice of his chilli – you’d have thought the term ‘chilli’ on the menu may have been a good enough hint at it’s possible taste. You’ve got to love a pace that has a great sense of humour and this place certainly has personality a plenty.
I might have only spent a day in York but it has certainly made its way into the chart of one of my favourite places in the UK for a short break. I’ll be back York.